Frozen Waterfall in Michigan's UP

I’m sure that caption got your attention, and I wish it WAS just clickbait. Unfortunately, it was the reality of this trip. I recently returned from a short three day trip (two being for travel as it was a 7-8 hour drive) to Munising, Michigan. The main goal: Going to Grand Island by Snowmobile to photograph the stunning ice caves on the east side.

That, however, is a blog for another day. Yes - I am stalling. I need a bit more time to edit the 300+ photos I captured during that day. In the meantime, I have quite a story for you! After photographing the ice caves, I decided to make a journey to revisit a waterfall I photographed in the fall of 2017: Miners Falls. I packed way too much into that initial trip (lessons were learned), and so I did not get to spend much time here the first time.

Now, I had the opportunity to return there in the winter. I have not done a lot of winter photography, particularly on trips, as I prefer traveling in nicer weather. Nonetheless, the ice caves lured me here, and I decided to make the most of it! Miners Falls at this time of year is pretty much completely frozen over and quite a sight compared to in the fall. For reference, here is what it looks like most of the year: 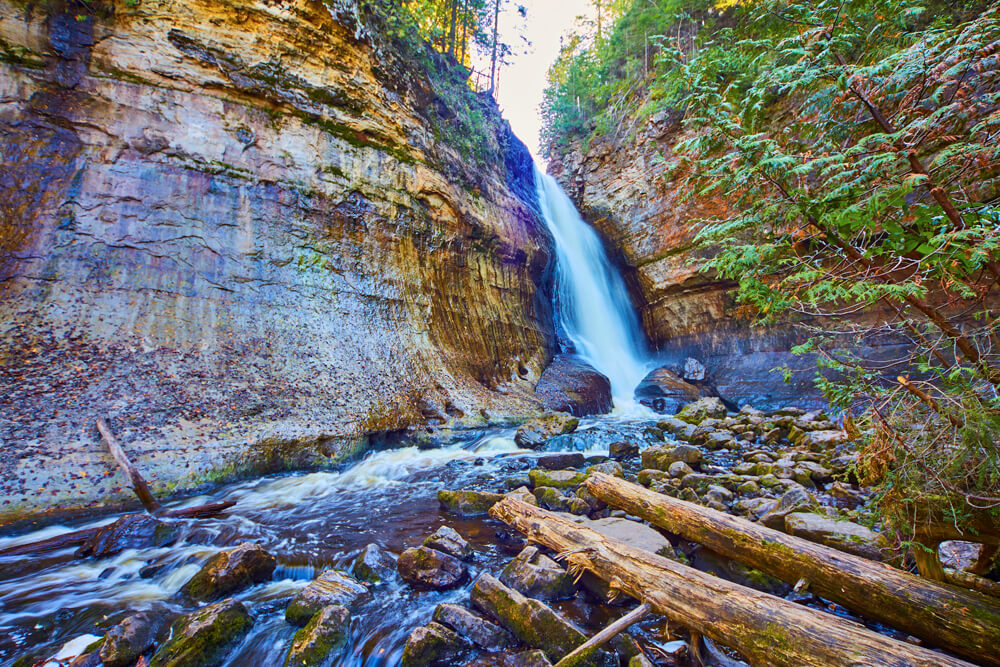 The Journey to the Falls

The process of getting to the frozen waterfalls, like most journeys, has a deceptive way of starting off easy and escalating in difficulty by the end. This journey is best described in phases of progression:

The drive from our hotel to the falls was about 20 to 30 minutes, and it started off very easy. Despite two to three feet of snow accumulation, it had not snowed recently, and the roads were fully cleared and dry.

As you enter into the national park region, the road is now fully covered in snow. It was not particularly icy and was almost entirely a wide, straight road with nearly no traffic. Not so bad so far!

Phase 3 - Not maintained by park

For the last 2 miles, the roads are no longer serviced by the park for snow. The road became a bit more bumpy and thicker with snow, but it was still not a real issue to travel on.

The last half mile to the trailhead was a VERY rough road, a literal constant series of small to medium sized waves of snow every few feet, varying in depth. I decided to stop about 0.3mi away and walk to the trailhead to avoid any issues.

Finally, I am at the trailhead! As I recall from being here in 2017, it was about a mile walk and pretty much a flat and smooth trail up to the first overlook. That was pretty much my experience in the snow as well. Very easy to traverse.

Now, I made it to the frozen waterfall from the scenic overlook. You can’t see much thanks to trees. The path down looks treacherous and starts with stairs. Stairs are easy, right? WRONG! They were 100% filled in with snow/ice to form a 45 degree slip and slide.

I am not a squirrel. I do not wish to see if I can survive moving at terminal velocity.

I, like others before me, opted to walk to the side of the stairs, as that was much “safer”. It was still very steep and difficult and I butt-slid most of it while also using the railings for support. I should note, I was wearing some basic diamond-studded cleats, but they didn't quite cut it on steep, icy paths.

Phase 7 - Now it gets difficult

Now was the hardest part, believe it or not. This was similar to Phase 6, minus the railing support. It was a zig-zagging path that was also much steeper, maybe 30 degrees, down to the level of the falls. There was more butt sliding and moments of panic when I'd start sliding and speeding up very fast. At this point, I was really wishing I had managed to procure the spiked cleats and brought more ice-climbing gear.

Time to enjoy the frozen falls! They were 100% frozen and this was a LARGE waterfall before, as you can see from the image I shared above. From the images below, it is nearly unrecognizable. While outside of winter it is basically a cliff straight down to ground level, here in winter, you would think it was a slope as it is so filled in where the falls are.

It was crazy seeing so much of it frozen. I could hear water flowing at the top and see exposed water about 100 feet down, but the top of the falls were buried, and the very clear “trail” that existed to climb to the literal top of the falls was 100% ice. Only ice climbers were going that way.

The journey back wasn’t as bad, but it was very draining. I found the reverse of Phase 6 and 7 to be very physically challenging, but it went 10 times quicker and was not nearly as intense as going down. It might just be me, but that is my general philosophy on climbing - going up is WAY easier than going down.

Disaster strikes and cost over $500

This is where I WISH this story ended. However, seeing as that is not reality - I think I should at least make the best of a terrible situation and share my story for either entertainment or “learning experience” for you.

Upon returning to my car, exhausted, I started to take off my cleat accessories (they attach to your boots) and realized I had lost one of the two cleat accessories. It HAD to have been lost at Miners Falls as I had just put them on when I got there.

At this point, I decided to say f&*% it. They were only $50, and I did not know where they fell off. They were not within sight of where I was. They could very easily have been at the waterfall, and I did not want to do that again.

Did I mention all of this is on my birthday? Just a fun “side note” of context.

Getting back to the hotel, I told my wife, and we decided to go back and see if we could find them before going for dinner. It was about 4pm. The only reason we decided to do this is because I suspected they MIGHT be near the trailhead where I had stopped to take a photo (where I knelt down on the ground to open my camera bag). That spot is very easy to get back to as it was - like I said - at the start. I thought, no harm at least going back to that spot and seeing if they were there.

So, we proceed on the journey and get to Phase 4 - The waves of snow. This time, I decided to NOT stop at that 0.3mi spot and walk, as the road did not seem that bad in hindsight. It was fine all the way up to the trailhead parking lot and then suddenly our car got completely stuck. One tire, the front right, fell down about a foot. After an hour of trying to get it out, we had no luck.

At one point, I dug down to the ground to see if I could find some material for traction, which is how I found out the area we were in was maybe 2 feet deep.

We have AAA, but unfortunately, we had no phone signal on either of our phones and had to call 911. U.P Wilderness Towing & Recovery was extremely friendly and helpful, and they got in touch with a tow that got to us about 2 hours later. 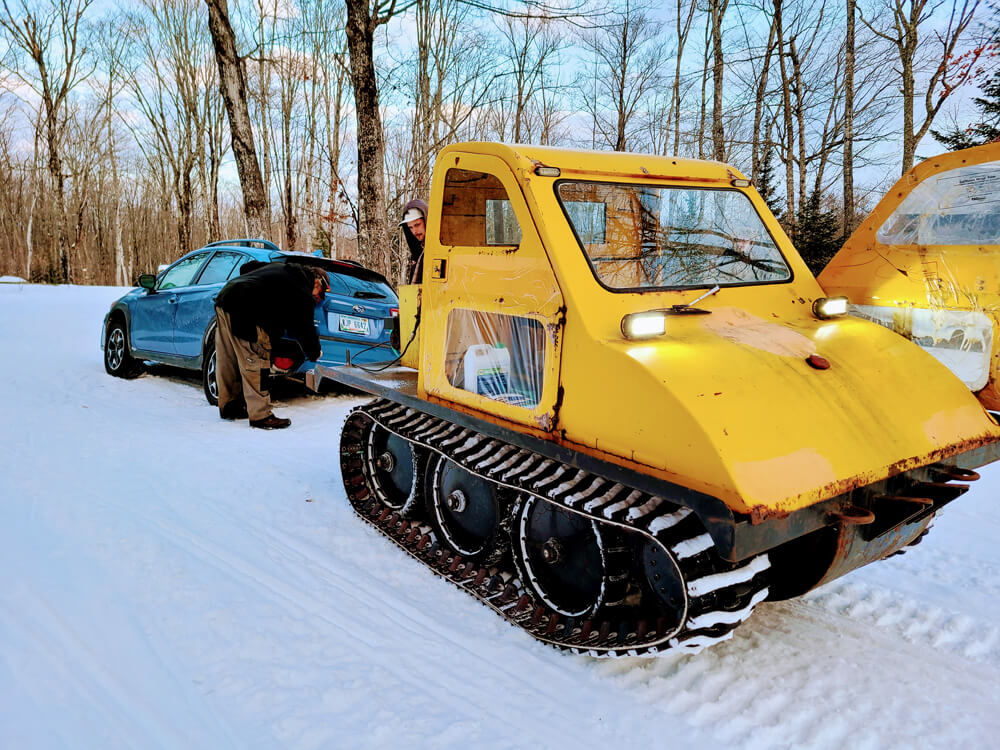 It ultimately cost us $533 (to be precise) and some embarrassment, though the tow guy, Derrick, was very friendly. He did advise our mistake was not staying in the center of the road, no matter what, as the rest might not be packed down. He apparently goes out here for situations like this 5 times a week (to this very area we were in). We were out and free just after sunset and proceeded to get dinner and collapse in our hotel room.

So, that is how a simple journey to photograph a frozen waterfall in my spare time led to a $500 expense! Hopefully you either enjoyed this story or learned something from it (like I did!).

Here is a 360 Panorama at the frozen waterfall, so you can practically be there yourself, for FREE:

Last, but not least, here are some of my favorite photos of this frozen wonder!

Miners Falls trail to the falls

8 Tips for working from home

Frozen Waterfall in Michigan's UP

Founder and visual artist, specializing in all aspects of a businesses presence from imagery and video to graphics and web. A graduate of IPFW with a Bachelor in Fine Arts, Concentration Photography as well as an Associates Degree in Business. His personal photography works are focused on landscape, travel, and aerial photography.

Let's start your next project.